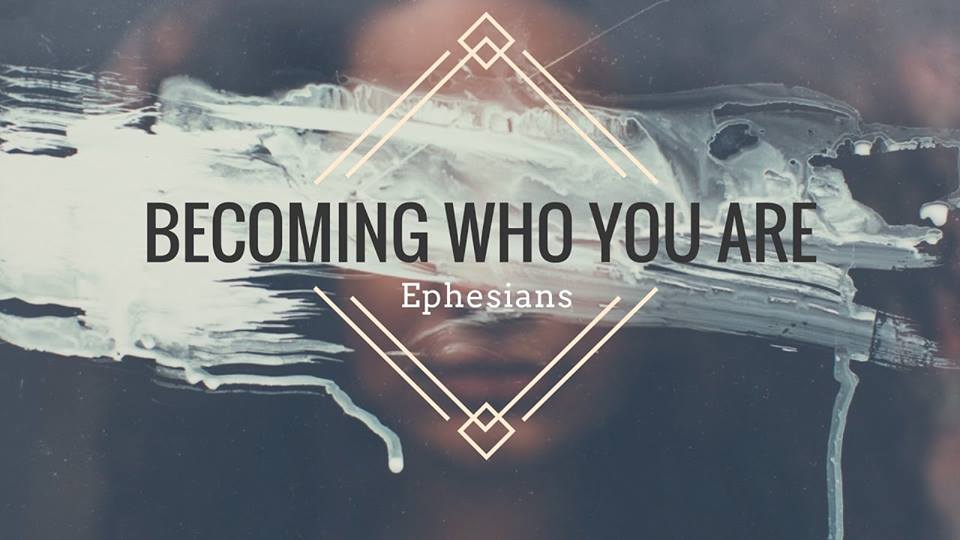 The Book of Ephesians – 2. Identification

Wow, I so enjoyed our time last week. I felt like many of you were just RECEIVING all you could and God was just filling up your cup. I know many of you are learning new things when it comes to being a believer and embracing your New identity. And for some that learning has not YET translated into life. Hanging for you so to speak. Or your circumstances haven’t YET changed. Don’t be dismayed. Don’t be sidetracked. The seeds have been planted. And they will grow up and produce great fruit in your life.

I was just recently asked a question this week, ‘how do you know Justin that what you are teaching is right?’

One of the primary ways (besides congruent with Scripture) is the fruit I see in peoples lives –
1.New Found Joy.
2.A Desire to Know God more.
3. A Growing Love

Let me read the 6 verses we will attempt to cover today…
Eph. 1.1 (NKJV) Paul, an apostle of Jesus Christ by the will of God, To the saints who are in Ephesus, and faithful in Christ Jesus:
Eph. 1.2 (NKJV)Grace to you and peace from God our Father and the Lord Jesus Christ.
Eph. 1.3 (NKJV) Blessed be the God and Father of our Lord Jesus Christ, who has blessed us with every spiritual blessing in the heavenly places in Christ,
Eph. 1.4 (NKJV) just as He chose us in Him before the foundation of the world, that we should be holy and without blame before Him in love,
Eph. 1.5 (NKJV) having predestined us to adoption as sons by Jesus Christ to Himself, according to the good pleasure of His will,
Eph. 1.6 (NKJV) to the praise of the glory of His grace, by which He made us accepted in the Beloved.

is a letter. To believers. A letter is considered to be Paul’s theological masterpiece—because Paul packs everything essential for you to know about your NEW LIFE in one short letter.

It is known at the Epistle of GRACE.

The book is also know as possibly being the written description of the revelations Paul was referring to in 2 Cor. 12;1,4.

2Cor. 12.1 (NLT) This boasting is all so foolish, but let me go on. Let me tell about the visions and revelations I received from the Lord.
2Cor. 12.2 (NLT) I was caught up into the third heaven fourteen years ago.
2Cor. 12.3 (NLT) Whether my body was there or just my spirit, I don’t know; only God knows.
2Cor. 12.4 (NLT) But I do know that I was caught up into paradise and heard things so astounding that they cannot be told.
2Cor. 12.5 (NLT) That experience is something worth boasting about, but I am not going to do it. I am going to boast only about my weaknesses.
2Cor. 12.6 (NLT) I have plenty to boast about and would be no fool in doing it, because I would be telling the truth. But I won’t do it. I don’t want anyone to think more highly of me than what they can actually see in my life and my message,
2Cor. 12.7 (NLT) even though I have received wonderful revelations from God.

Eph. 1.1 (NKJV) Paul, an apostle of Jesus Christ by the will of God, To the saints who are in Ephesus, and faithful in Christ Jesus:

Two statements to live by –
“I am here to do my father’s will”.
“Not my will but your will be done.”

True joy is not in having your own way, but in yielding to God’s way.

Saints (or holy ones) = refers to those who have been set apart for a specific purpose.  For a relationship with the creator who is now our Father.

There should be no reluctance in your mind of identifying yourself as a “saint.” Our only reluctance might come from the fact that we’re not living as we think we should live– HOLY. The title “saint” is given to us because of what Christ did for us, not because of how well we live.

We are chosen, not because we were holy, but that we would be made holy in Him.

Its out of our BEING that we DO. Therefore, We are called to live different because we ARE different!

Eph. 1.1 (NKJV) Paul, an apostle of Jesus Christ by the will of God, To the SAINTS who are in Ephesus, and faithful in Christ Jesus:

ONE OF THE MOST important revelations we can understand is that we have been placed in Christ and Christ dwells within us.

You and I are a new creation, and we were created in Christ Jesus and the spirit of Christ dwells within us.

When we were saved, God placed us (our new creation self) in Christ, therefore we are now “accepted in the beloved.”

We now have Christ’s life and nature within us.

In Christ defines our eternal, permanent & spiritual location and position.
In Christ is our new reality and perspective.
In Christ grants us access to an intimate, living union between a believer and his Lord.
In Christ speaks of your new life in Him.

The phrase in Christ or in Him, occurs 9 times just in chapter 1.

That phrase occurs nearly 160 times in all of Paul’s writings.

In the eyes of God, We are no longer sons of Adam or “sinful” men, but we are now “saints” who have been placed in Christ. The 2nd Adam.

The statement “in Christ” is the cliff notes of the Gospel. The gospel (In Christ) speaks of our sameness, wherein Christ has made us equal sharers in His inheritance.

It speaks of a joint partnership with Christ that whatever Heaven showers upon Him, will be showered upon us as well.

you are complete in Him;
you are filled to full with the fullness of the Godhead.

So it may sound and appear humble to call yourself and treat yourself like a lowly no good not deserving sinner. But true humility is to accept by faith WHO we now are in Christ and confidently acknowledge all that is good because of Christ in us.

How many find it easier to recognize & acknowledge your weaknesses, your faults and your flaws?

Philem. 6 (NKJV) that the sharing of your faith may become effective by the acknowledgment of every good thing which is in you in Christ Jesus.

In Christ, you are as Jesus is before the Father. Just like Identical twins (positional not conduct).

This is what is called identification. The Father looks at you and He sees in you Christ.

The definition for identity reads, the condition or fact of being the same in all qualities under consideration; sameness; oneness…

When we really understand that we have been placed in Christ—it changes the way we think and live.

When you understand your new identity in Christ, you’ll be a stronger and more stable Christian.

1. We Identify With His Death…

We Died With Christ!!!

Rom. 6:6 (Nkjv) Knowing This, That Our Old Man Was Crucified With Him, That The Body Of Sin Might Be Done Away With, That We Should No Longer Be Slaves Of Sin.

If you were to ask the jews there at the crucifixion, what is happening here? They would have answered, a blasphemer is being put to death…

If you asked the Romans, they would have said, some misguided jew who thought he was a messiah is being marked red for his mistaken beliefs…

If you ask the church today, the vast majority would answer, the son of god hung there; and of course, that is true…

But if we ask God, what happened there? He would reply as he did through paul, the old humanity, your old man, died there the cross was God’s way of doing away with the old you…

2. We Identify With His Resurrection…

Now Christ died for us he rose again for us so we were accredited with having died and risen again it was as though we had done it that’s what we mean by our identification with Christ in his death and resurrection.

Rom. 6:8 (Nkjv) Now if we died with christ, we believe that we shall also live with him,

Col. 2:12 (Nlt) for you were buried with christ when you were baptized. And with him you were raised to a new life because you trusted the mighty power of god, who raised christ from the dead.
Col. 2:13 (nlt) you were dead because of your sins and because your sinful nature was not yet cut away. Then god made you alive with christ. He forgave all our sins.

When Jesus died, He died as us as well. The death of One was the death of all (2 Cor. 5:14) and when He was resurrected, we were resurrected as New Creatures. The old man passed away, meaning he is dead.

Rom. 8.28 (NKJV) And we know that all things work together for good to those who love God, to those who are the called according to His purpose.
Rom. 8.29 (NKJV) For whom He foreknew, He also predestined to be conformed to the image of His Son, that He might be the firstborn among many brethren.

2cor. 5:17 (Nkjv) Therefore, If Anyone Is In Christ, He Is A New Creation; Old Things Have Passed Away; Behold, All Things Have Become New.

Everything old was abolished at the cross when Jesus died and all things have become new. The term used for newness is the Greek word “kainos” which refers to that which is unprecedented, that which is unheard of, that which has never happened.

In Christ, we have been made unprecedentedly new with a newness that does not grow old. Renewed day by day!

The twentieth century translation says,
“if anyone is in union with Christ, he is a new being!”

Grebers translation says,
“his old self is gone, and a new one has taken its place.”

This is not just a change, not to renovate, not to reform, not to improve, not the old nature adorned and beautified… it is not the old adam made clean or religious, clothed and adorned… no! It is something altogether new…

Gal. 2:20 (TPT)
20 “My old identity has been co-crucified with Messiah and no longer lives; for the nails of his cross crucified me with him. And now the essence of this new life is no longer mine, for the Anointed One lives his life through me—we live in union as one! My new life is empowered by the faith of the Son of God who loves me so much that he gave himself for me, and dispenses his life into mine![r]

Eph. 1.2 (NKJV)Grace to you and peace from God our Father and the Lord Jesus Christ.
Eph. 1.3 (NKJV) Blessed be the God and Father of our Lord Jesus Christ, who has blessed us with every spiritual blessing in the heavenly places in Christ,